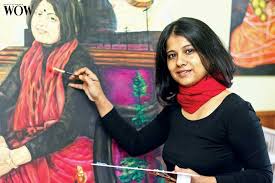 Kurchi Dasgupta (born 1974 in Kolkata, West Bengal) is an Indian painter, art critic, actor and translator. She currently lives between Kathmandu, Nepal, and Kolkata, India.
Dasgupta gained a diploma in commercial art in 1994 and earned a Master of Arts degree in Comparative Literature from Jadavpur University, Kolkata in 1998. She was the chief executive officer of the Society For the Preservation of Satyajit Ray Films (The Ray Society) for two years until 2006. She was also the head of the Lotus Print publishing house for three years. She shares her time between Kathmandu and Kolkata at the moment, with her son and husband.