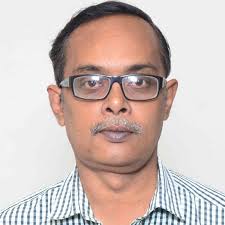 "I am fascinated by the intricacies of the human personality, fortified as it is with a strong will force and always at war with antagonistic forces."
Bijon Choudhary is a strong believer in human traditions that date back centuries. "I also believe in a balance of emotion and thought in art," he says. Choudhary asserts that he has felt that fascination for anything new. "Yet, needless experimentation has caused immense disorder in the field of creative art. I think there is a limit to what you can experiment with and how much," he adds.
The artist studied at the Government College of Arts and Craft, Kolkata between the years 1946-50. But he graduated from the Government Institute of Arts in Dhaka, Bangladesh. He has held a 'Retrospective' at Kolkata in 1963, a miniature exposition in Paris in 1982 and 'Retrospective Exposition' by Art Heritage Gallery in 1986. He has also participated in Indian Artists at Stockholm in 1982, Indian Artists at Goethe Institute, Munich in 1984, the III Triennale, New Delhi in 1975, the Festival of India in 1982 and 'Trends in Bengal Art' at London in 1986.
He is the founder- member of the Society of Contemporary Artists and a member of the Democratic Writers and Artists Association. Choudhury also belongs to the Art Advisory Committee, Government of West Bengal Painters. He has won awards from the Academy of Fine Arts in 1963 and the Rabindra Bharati Award in 1978.
A politically aware painter, like many others of his time, he felt that abstractions in the art are caused by frustrations resulting from a capitalist atmosphere. He comments, "It will be sheer foolishness on our part to neglect reality and run after abstract art in a country which is still in the grip of poverty, illiteracy, and prejudice."
Choudhury's works can be found amongst the collections of the National Gallery of Modern Art, New Delhi as well as amongst several private collections within India.

Member since 3 years ago
View Profile